A hairdresser with international dreams! 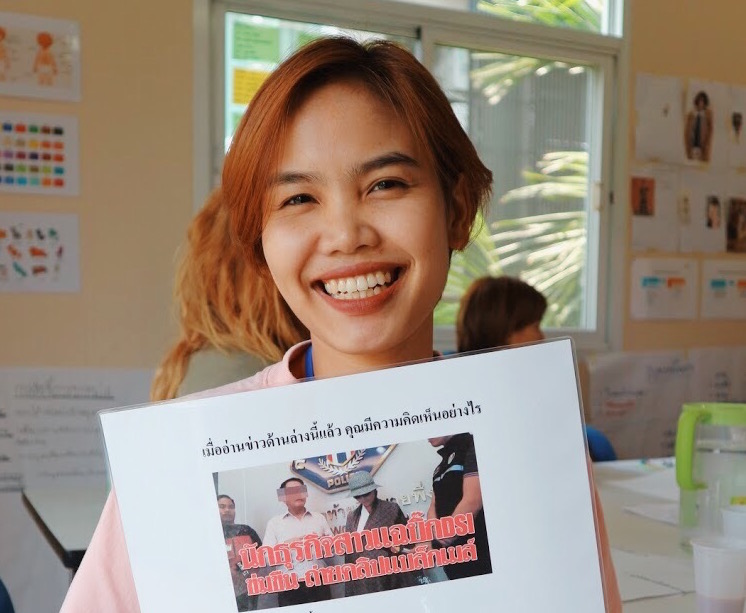 “I came here with hope that I would be able to speak English; I gained more than that. My life is so much better since I started studying here.”
Priyaphon Arethno (Joom) was born in Suphan Buri in 1993. After a difficult childhood, Joom was sent to live with her grandmother after her parents divorced, only seeing her father again when she was 18 years old. Joom prioritised work over education, finding employment at farms, factories, and even dancing for local musical groups. She officially quit school to work full-time in 2005, but earned barely 300 Thai baht a day. When she made the move to Bangkok, she initially earned 40,000 baht as a waitress in Bangkhae. However, Joom still sent money back to her mother and grandmother, leaving her with little to no savings. Deciding to make a career change in 2009, Joom set her sights on being a hairdresser. Though her monthly salary was only 9,000 baht, she felt far more content with the career path she had chosen for herself. Joom’s motivation to relocate to Bangkok was similar to many other girls in the same socio-economic position. In bigger cities, individuals usually find a wider variety of career opportunities that come with higher salaries. Urbanisation invites migration; no one can prevent the inevitability of people relocating to urban areas in the pursuit of a better life, no matter the dangers that may lie ahead. What Pratthanadee can do, however, is provide these young women with the tools to prosper, make progress, and protect themselves within these unfamiliar environments. Before attending “Better Me,” Joom could not read or write in Thai, lacking essential communication skills needed to talk to customers in her salon. With her shy demeanor and low self-esteem gradually improving to confidence during the course of the programme, Joom enjoyed English classes and the skills she learnt in workshops such as “Thinking about the Future” and “How to Start Planning.” Currently, she can read and write, but is aware that her skills are still a work in progress. After completing 3 months of “Better Me,” Joom is no longer fearful of speaking English to foreign customers. In 2016, Joom applied to a well-known Japanese hair salon and was accepted, demonstrating the impact that programs like “Better Me” can have on the lives of young women. Because of her new and improved self-confidence, Joom strives to not only be better, but do better; now harbouring aspirations of working abroad among other professional hairdressers. Joom is only one of many examples of what Pratthanadee can enable students to accomplish if they open their hearts to development and change.