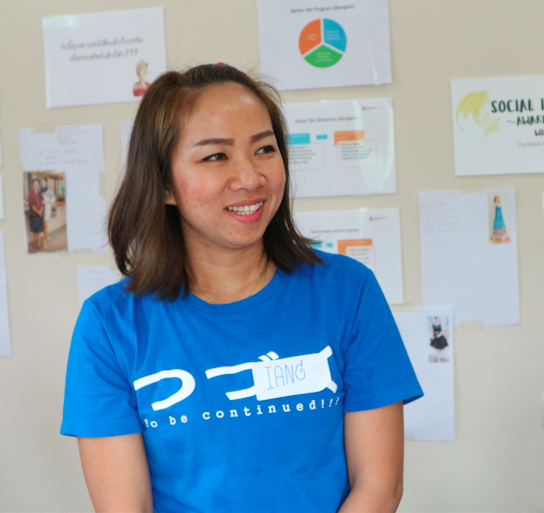 Iangkham Romkhao, known as Iang, is a 35 year old massage worker from Chiang Rai. Her family is originally from Issan, having moved to Chiang Rai because of the drought. Iang has three siblings, but she was the only one who had the opportunity to study at the secondary level. At the age of fifteen, she graduated from junior high school and moved to Bangkok to work, even though her dream was to continue to further her education.

Her first job in the city as a 17-year-old girl in a noodle shop. In just a short time, Iang changed her job and started working in a restaurant. Dish washing and serving food earned her 2,500 baht per month, with a free meal and accommodation. At the shop, she met her first boyfriend. After four years without a stable job and her impatience for her boyfriend’s flirtatious behavior, she decided to break up with him. She then started a new job at a small factory, where she met the father of her children in 2005.

When her second child was born in 2009, Iang realized she had nothing – no money nor assets – but her children needed brighter futures. A year later, she flew to Taiwan to work in a glass noodle factory. Iang worked there for three years then returned home only to become estranged from her son, who she left when he was only one year old. He did not even call her ‘mother’ and her husband was with another woman. Life had changed again.

In the same year Iang went abroad again after three months of trying to earn a living as a masseuse in Bangkok, which did not provide sufficient income. Iang went to South Korea and was paid very well for almost two years. In 2016, she was arrested for working in South Korea illegally and was sent back to Thailand after a month in prison. For the last year, Iang has been working as a masseuse in the Sukhumvit area and still hopes that one day she can work legally in some country in Europe.

Iang heard about Pratthanadee Foundation from one of her colleagues who is now studying here too. She told her friend that she loves to study because she always got the highest grades in school. Unfortunately, even though she wanted to continue her education into the senior level, her parents did not have the capacity to support her and the nearest high school was too far to attend. Thus, when the opportunity came, she did not wait any longer. Iang joined the Better Me program in a class that is supported by Linkslater (Thailand) Ltd. since February 2019.

English class is her favorite. At the beginning, she had difficulty understanding grammar and remembering key vocabulary. But now, after trying to use what she has learnt with customers every day, she is starting to remember without even trying!

“My son is always my biggest trouble. I worry about how he will be when he grows up. We aren’t close and he never calls me mother because I left him when he was young. After attending the Better Me program, I learned that if I want to make a change, I need to start from myself, carefully considering the situation, and then making a subjective plan.”

Other than the English course, she also attended the Better Me workshop where she was able to plan out her future. Iang had plans to complete a house but construction stopped since she broke up with her ex-husband. Accumulated debt is now her responsibility to take care of. She plans to pay off all the debt by next year and will start saving money to revive plans for her house. If this plan comes true, she hopes to reunite with her son.