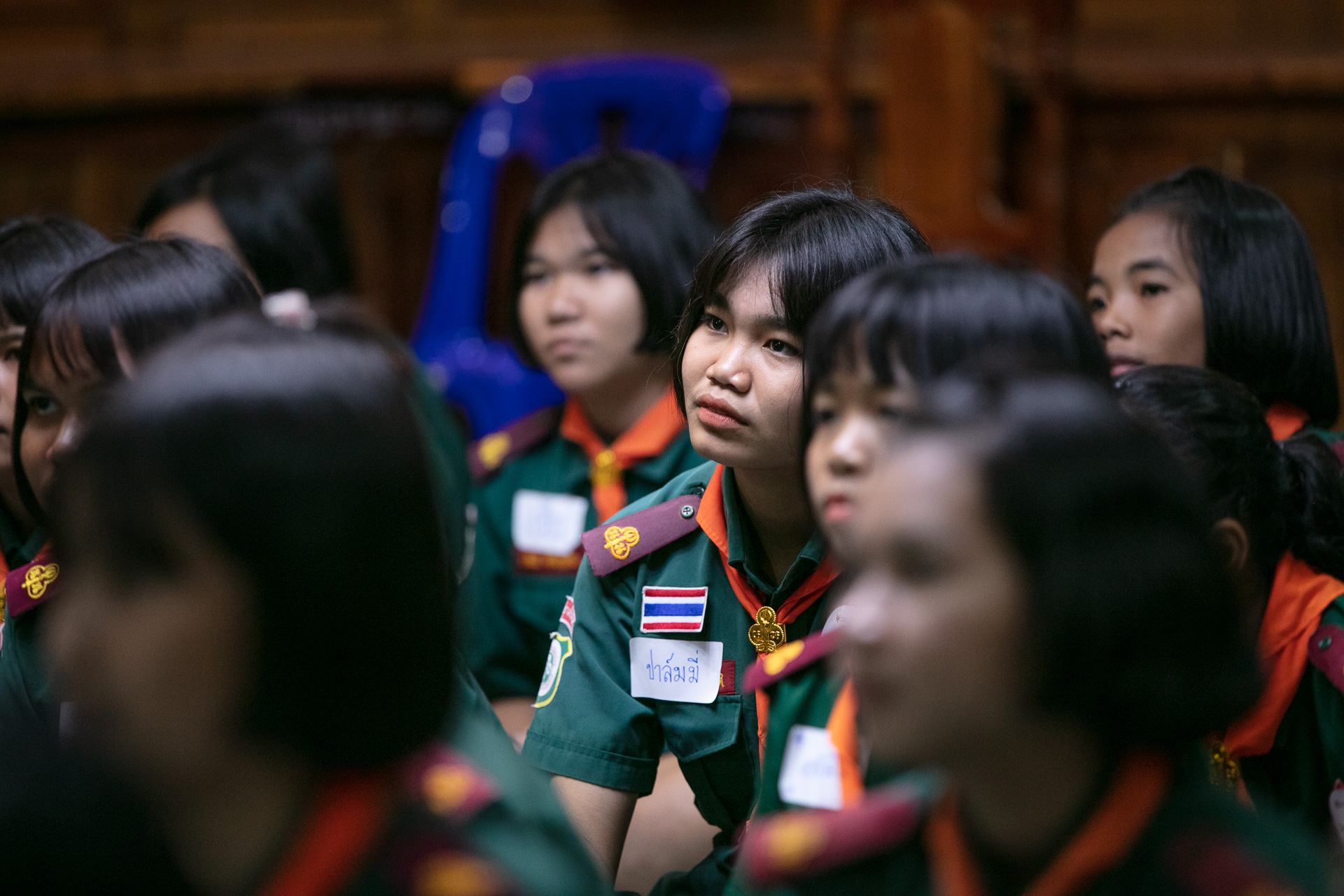 I’ve been involved with Pratthanadee to varying degrees since I first came to Thailand nearly 20 years ago.  Having moved to Phuket in recent years, I’ve been wanting to catch up on how the foundation’s work in the Issan region of Thailand has progressed.  Since I last visited the Ubon Ratchathani (Ubon) office five years ago, the staff had been refining the approach, focus and teaching materials for the seminars they run.  These seminars target 12-14 year-old female public school students at the Mor 2-4 level (the equivalent of 8-10 graders), addressing 40-50 girls in each session.  I wanted to see this newer program first-hand.

Several times a year – depending on available funding – Pratthanadee Director Beer and staff member Duang fly into town from the Bangkok office to unite with Nang from the Ubon office to conduct these trainings.  Every weekday morning for 3 consecutive weeks the three of them drive out into the countryside surrounding the city– sometimes travelling as much as two hours away – to deliver these trainings and then return to Ubon the same day.  It’s a grueling schedule.

In June, I flew to Ubon and observed two days; a “Planning for Success” training on a Wednesday at a high school in Si Saket, then a “Claim Your Rights” training at different school in southern Ubon province about a 2-hour drive away the following Friday.

Following are my observations on the 4 half-day trainings I attended:

This is an introduction to career planning for young girls, an attempt to get them thinking about what they might do to maximize their opportunities after school, be that by studying further in university, trade school or by entering the workforce.  The girls are given handouts that detail their various continuing education options as well as the salaries that might be expected in certain trades. They then break up into small groups to discuss their ideal careers, and then each girl is interviewed briefly about her plan to actualize that career in front of the class.  Interestingly, for quite a few this appeared to be the first time they gave any serious thought about their futures. Judging from their reactions, this training seems to have made a real impression on the participants.

This program is an evolution of earlier self-defense trainings that I had seen taught in my prior visit to Ubon.  The new training includes self-defense tips as part of a broader program discussing different types of physical and emotional violence and how to resist them.  The various online confidence and financial scams facing young Thai women are reviewed in detail. The pertinent legislation surrounding women’s rights is discussed, as are the women’s NGOs and other organizations that help promote and protect women’s rights and safety.  Some basic self-defense moves are demonstrated and the comprehensive “Women’s Survival Guide” recently published by the foundation is distributed to all.

In both programs, I was struck by:

As I told the staff afterwards, I was impressed and at times moved by what I observed.  I truly believe these trainings, as brief as they are, are so very important because they address some of the significant gaps in the Thai education system and relatively (compared to the West) uninvolved rural parenting.  There are still tens of thousands of adolescent girls at hundreds of schools who could greatly benefit from exposure to these trainings.

From what I can see, there are a few challenges to the continued availability of these programs:

To conclude, the staff of Pratthanadee has a lot to be proud of. I’m hoping that as word spreads about this program it can attract more funding and be continuously developed and expanded in the future.